No products in the cart.
CHF0.00 Cart

The most beautiful places in Puglia 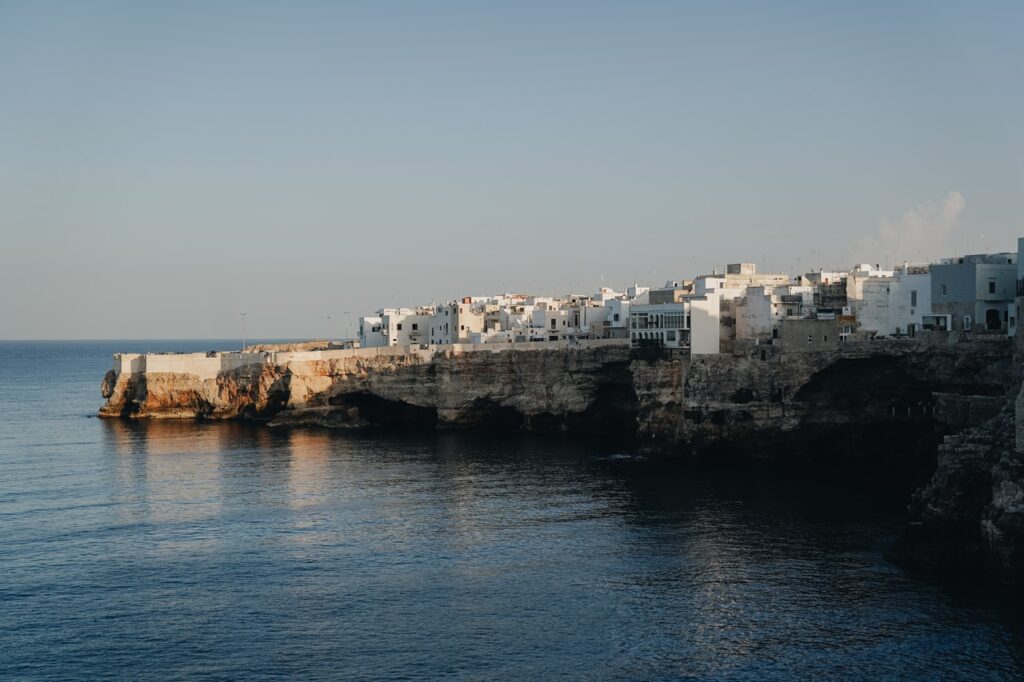 Puglia is a land of boundless plains alternate with hills and a crystalline sea. It is placed at the heel of the Italian peninsula and it is considered one of the regions with the most beautiful beaches of the country. In this region, history and tradition are everywhere: not only can you find magnificent cities of art but also historic villages and farms surrounded by boundless expanses of olive groves. Not to mention the cuisine … traditional dishes made from local products with an ancient and incomparable flavor. If you too want to go on a trip to this wonderful land, below you will find some of the places that you absolutely must not miss.

1) The Castellana Caves
The Castellana Caves, a few kilometers from Alberobello and Monopoli, represent one of the natural beauties of Puglia. Over 3km of caves that wind up to a depth of 122 meters with an average temperature around 16°. Be amazed by caves, deep abysses, fossils and stalactites with imaginative names and amazing colors. The guided tour goes through a path that winds at a depth of 70 meters. It begins with the descent – via a staircase – which will take you to the bottom of the Grave from where your discovery of suggestive places such as the Altar Cave and the White Grotto will begin.

2) Castel del Monte
Built by Frederick II around 1240, Castel del Monte represents one of the most mysterious places in Italy. The castle stands on the top of a hill in the western Murge plateau in Puglia, in the municipality of Andria, and in addition to having been built in a very precise way, it is full of symbolisms that have fascinated many visitors, including scholars. The octagonal shape of this building, which is composed of an octagon whose vertices rise 8 octagonal towers, is a symbolic geometric shape: it is in fact an intermediate figure between the square, symbol of the earth, and the circle, symbol of the sky. It would therefore seem to represent the passage from one to the other. In 1996, UNESCO also decided to include Castel del Monte in the list of world heritage sites.

3) Bari
Capital of Puglia, Bari is a lively port city, overlooking the Adriatic Sea, full of architectural works, wonderful churches and an ancient castle that dominates the historic center. The historic center in particular represents the most lively part of Bari: a place, a stone’s throw from the sea, where you can breathe the Apulian tradition, colors and scents that convey the true essence of this city. For those who love to visit churches and monuments, in Bari you will find an infinite number of choices: from the Basilica of San Nicola, patron saint of the city, open to both Catholic worship and Orthodox rites, to the Cathedral of San Sabino with its dome that is higher than 35 meters.

4) Gargano and Vieste
Nature lovers cannot miss the Gargano promontory: a strip of land, called “the spur of Italy”, which extends towards the Adriatic Sea and hosts the greatest degree of biodiversity in Europe. While much of the hinterland is covered by the 15,000 hectares of the Umbra Forest, along the coast there are golden, sandy beaches and small historic villages, alternating with majestic stacks overlooking the sea. Suggestive places from which you would never want to leave again. Among the most evocative villages, Vieste deserves a mention. Perched on the east coast of the Gargano, it is one of the most popular places in Puglia, where golden beaches, lonely bays, sea caves and breathtaking overhangs alternate in a breathtaking view. The historic center of Vieste, commonly called “Vieste Vecchia” (Old Vieste), has kept its original characteristics almost intact, with its typical narrow alleys, the squares from which you can see the sea and the terraced houses.

5) Alberobello – The city of the Trulli
In the province of Bari, along the coast, lies the town of Alberobello, also known as the “city of the Trulli” for the numerous traditional Apulian dwellings (the trulli in fact) which are still intact and characterize their appearance. An obligatory stop in this town, which became a UNESCO heritage site in 1996, to discover the history and traditions of the Murgia dei Trulli, where plateaus and plains alternate with hills.

6. Ostuni – The White City
Located in the province of Brindisi, in the southern Murgia and on the border with Salento, Ostuni is also called the White City because of its characteristic historic center which was once entirely painted white. A walk in the old city, known as the “earth”, offers picturesque views of alleys, steep stairways, courtyards and enchanting squares. In the evening, especially during the summer, the numerous shops and clubs animate the city giving pleasant walks to visitors, who can taste the typical dishes of the Apulian tradition or shop.

There are many places that deserve to be visited in Puglia. This is just a small list of the wonders that characterize this region. We will definitely come back to talk about Puglia and tell you about some other places!